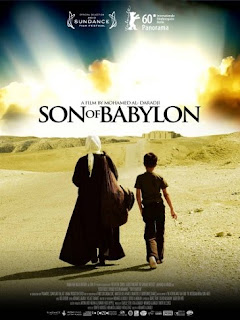 Well, no amount of cheerleading here or elsewhere is likely to have any impact whatsoever now on the chances of Son of Babylon receiving an encore screening at MIFF; it transpires that its two previous screenings both flew in the face of its producers' and director's wishes, something which came to light only on Friday just past, not that you'd know about it through either MIFF or through the mainstream media.

I feel very sad – and rather conflicted – about this. I would have it that as many people, spread as far and wide across the globe as possible, could see this superb, harrowing film, which, a la Bahman Ghobadi's extraordinary Turtles Can Fly, is hard to credit was even made, let alone made so well and to such powerful and profound an end result.

However, knowing that to screen it here – to have screened it here twice already – goes altogether against the wishes of its producers, in connection with their horror at belatedly discovering that MIFF is in a cultural partnership with the state of Israel, troubles me considerably.

My lived experience in the Middle East runs only as far as 10 days spent in Abu Dhabi just last year, for the most part cocooned in the incredible unreality that was to be a pampered guest of the impossibly deep-pocketed 3rd Middle East International Film Festival, covering this fledgling would-be A-list festival for Senses of Cinema. But while that meant I spent precious little time amongst the everyday folk of the UAE's capital – my experiences of downtown Abu Dhabi were limited to just a couple of desultory, slightly nervous ground level sojourns and no small amount of al fresco shisha smoking in the company of an American expatriate – there was nonetheless absolutely no misinterpreting the wider Arab world's feeling towards the conduct of the state of Israel, to the limited extent they ever even acknowledge it as a nation state at all. The depth of Arab ill-feeling towards Israel, with, of course, particular respect to its part in the inexorable Israel-Palestine conflict, is not something I would ever think to trifle with.

It saddens me that I no longer feel I can (futilely, anyway) champion an encore screening of this wonderful film at MIFF and will instead simply hope that one of Australia's many fine exhibitors/DVD distributors picks it up to give it a second life, and a far wider audience, around these parts. 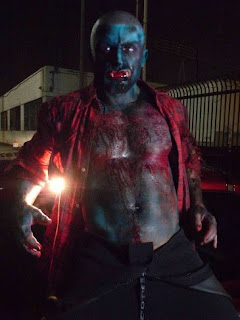 Anyone keen to read more about this rather messy second controversy to hit the 2010 MIFF (the first being, of course, the rather absurd business of the Australian Classification Board's eleventh hour refusal to allow MIFF to screen L.A. Zombie (almost agreeably absurd – a man named Donald McDonald bans a film made by a man named Bruce La Bruce – you just can't make this stuff up!)) ought to read “How the Melbourne Film Festival embraces apartheid Israel” on Sydney-based multihyphenate Antony Loewenstein's blog, which gives due consideration to a blow-by-blow account of a handful of oppositional leaked correspondences between the Son of Babylon production team and MIFF Director Richard Moore, correspondences reproduced verbatim elsewhere online.

I have to admit to considerable ambivalence about the online publication of these leaked emails, which is why I won't provide a link to them here. (If you really feel you must read them, you can be assured you'll have little trouble finding them.) Much of my ambivalence is in fact less concerned with the privacy issues surrounding putting into the public sphere a professional dialogue that was, of course, originally conducted privately, but rather with the unsanctioned exposure of the contact details of the parties concerned. That, for mine, is a bridge too far. I am in turn further troubled that my highlighting my concern with this instance of a world's worst practice might also only lead to a wider discovery of those very materials that I think oughtn't be exposed in the first place. Please, don't go there, girlfriends!

Anyway, moving on from the particularity of the Son of Babylon affair: Jacinda Woodhead's “Occupied with free speech” on the ABC's “The Drum Unleashed” makes for interesting further reading, in considering whether MIFF's recent receipt of Liberty Victoria's free speech award, the Voltaire award – about which there was some self-congratulatory chest-thumping during Richard Moore's Opening Night speech – isn't something of a travesty in light of the festival's acceptance of sponsorship from the state of Israel.

We live in interesting times...
Posted by Cerise Howard at 14:16