A quick entry ahead of some more MIFFing this evening and tomorrow.

I popped into 3RRR today to deliver an instalment of “A Fistful of Celluloid” outside of my regular fortnightly schedule, something that customarily happens mid-MIFF, the better to keep SmartArts listeners abreast of Melbourne film culture's flagship event, as it unfurls.

Anyone who caught my segment late this morning will have heard me recount some of my festival highlights to date, as well as my and Richard Watts' recommendations for the week-and-a-half of the festival still to run. Of the former: you read it here first anyway, folks! And of the latter, if you missed it: I've not much time right now to put it all into words (airtime is a lot more compact, at least for this little black duck, than writing time). For I needs get me to MIFF!

(A major disadvantage of hometown festival-going: my travelling distance to the festival tends to be rather greater than when at an overseas event, when the festival tends to put you up somewhere very central. Oh woe betide me the day I got forced out, through rent hike-inducing renovations, of my long-time dwelling in Fitzroy those couple of years back. Sunny Thornbury, for all its charms, is quite a distance to MIFF. But forgive me; I have digressed.)

One of my recommendations was less for something that still has another screening to go, but was rather for something that's had both of its appointed screenings at MIFF, but which I'd like the festival to seriously consider filling one of the “surprise” slots with on the final day of the festival: Son of Babylon (d. Mohamed Al-Daradj).

I'm kicking myself for not seeing it a second time, having being so blown away by it at its world premiere last October in Abu Dhabi. It was the stuff of standing ovations then, and I can't help but wonder how it is has been playing in Melbourne, so much further removed from the harsh realities that the fictional elements of Son of Babylon in no way cloak (or aim to).

It's an incredible piece of true guerrilla filmmaking, shot illegally in Iraq, but in no way haphazardly, on locations that are all too real, detailing the quest across that country of an old Kurdish woman (who can't speak Arabic) and her grandson (who, fortunately, can) to find his father, a soldier in the 1991 Gulf War, who might very well have perished and wound up in any one of the hundreds of mass graves being excavated all across what was already then (immediately post-Saddam) well and truly a war-torn country.

It's a truly heartbreaking film, and has a conclusion where the intersection of fictional and non-fictional elements within the film – already deeply distressing throughout – assumes whole new, ghastly dimensions. A scene of physical contact between the old woman and some bones – whose? – who'll ever know? – in one gravesite late in the piece sent a chill down my spine like nothing ever has done before it.

Shit. I'm running out of time, and I had really wanted initially to write principally about The Trotsky, a great fun new Canadian comedy from director Jacob Tierney in which a young high school lad believes himself the reincarnation of Leon Trotsky, and charts his life accordingly... 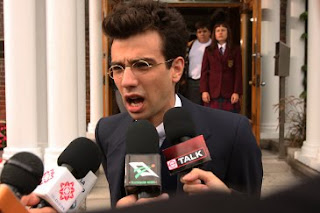 Imagine, if you will, the love child of Wes Anderson's Rushmore and Lindsay Anderson's If...., and you've got The Trotsky. Surely some local distributor will yet get with the program and pick this one up; it's got box office appeal in spades. The cast are all hugely appealing, with Jay Baruchel a necessarily fantastic lead, and Emily Hampshire is terrific as Alexandra, the older woman whom “fate” has decreed must yet be the (first) love of Leon's life; the romantic comedic elements of this film could have gone so horribly wrong, and it's a testament to her that they went oh so very right. Perhaps the film is just slightly overlong, but I - and a full house yesterday at the Forum - nonetheless enjoyed it tremendously.
Posted by Cerise Howard at 15:37