Of MIFF, Maddin and Max Headroom 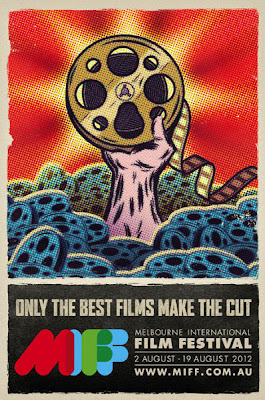 For Melbourne's cinéphiles and their fellow travellers, the greatest show in town is shortly to commence. Of course, I speak of the Melbourne International Film Festival and its second edition under the stewardship of über-cinéphile and former Senses of Cinema colleague* of mine, the wonderful Michelle Carey.

* Michelle is still a pillar of the Senses of Cinema team, serving as its Festival Reports Editor. It is I who have left, though I continue to contribute articles. For example, the next issue (due out... surely any day now?) will feature my report on the 26th Fribourg International Film Festival, while the miraculously still current issue features a lengthy screed in which I review two fantastic recent books on Guy Maddin: Into the Past: The Cinema of Guy Maddin by William Beard and Playing with Memories: Essays on Guy Maddin, edited by David Church.

MIFF aside, far and away the greatest film cultural event to hit Melbourne town in 2012 (notwithstanding the formal inauguration of yet another fine local film journal, Screen Machine) is still underway at the Australian Centre for the Moving Image. I speak of “Nocturnal Transmissions: The Cinema of Guy Maddin”, a really rather thorough* retrospective of Winnipeg's finest, most delirious and most exclamatory filmmaker, that great poet of Vaseline-smeared, amnesiac melodrama and recent Order of Canada awardee (!), Guy Maddin, running through to 27 July.

* But not completely thorough, even with as many as three weeks of screenings. Just below, for example, is a terrific Maddin short not screening as part of ACMI's season but which makes for an excellent companion piece to his brilliant The Heart of the World (2000) (one of my all-time favourite short films and more than just a little tinged with genius and reverence for the cinematic medium (just as, one might say, Maddin is himself tinged with irreverence for the 'medium' of the ghosts of cinema and Winnipeg's pasts, real and fabricated, that he himself bodily represents.))

The Heart of the World presents an altogether new Creation myth of the moving pictures, and so too does his under-seen 2009 short, Night Mayor. Courtesy of the National Film Board of Canada, enjoy!

Maddin devotees and novitiates alike should be flocking in droves to ACMI to get a fix of that inimitable imitator's truly astonishing body of work. Equally, both camps could do a lot worse than to tune in, using Melbourne radio stations Triple R's recently launched “Radio on Demand” facility, to a “Max Headroom” special from Thursday, 28 June, where I was joined by tremendous fellow Triple R critic, Thomas Caldwell, super-dooper ACMI programmer Kristy Matheson, co-curator (with Maddin) of ACMI's extensive Maddin season, and a pre-recorded Guy Maddin himself, from whom I had gleaned an exclusive interview and no few pearls of wisdom.

For example, the answer to the question on every cinéaste's lips: will not real Vaseline forever trump digital? Tune in and find out!

You can get it live, or you'll be able to get it “on demand” all the way up to six months later – your choice. Either way, be sure to catch the Thursday, 9 August edition of “Max Headroom” on Triple R when I join Tara Judah and Josh Nelson from the fabulous Triple R film criticism podcast, Plato's Cave, as we throw an hour's worth of musings at this year's MIFF from a fine vantage point, one full week into the festival, from where we'll cast an eye over what we'll have seen and what we'll anticipate we'll still yet see at Melbourne's film festival of film festivals. All the critical scuttlebutt from the 61st MIFF – and more!, more or less.

Here follows a cannibalisation of last year's edition of much this same blog post. The devil is in the details.

Please be advised that none of the following can be taken as gospel, for the distribution game is the stuff of whims, vicissitudes and, some have alleged, sorcery. Furthermore, some films may not be destined for theatrical release at all but rather may go straight to TV, DVD or Blu-Ray, online streaming or download, or even to YouTube, Vimeo and their like (to speak only of outlets a film might find itself distributed to legitimately). This means that MIFF might represent your only chance to see many of these titles on a big screen in Melbourne.

Last year I observed that I had never known there to be so many films screening at MIFF to have distribution lined up at a comparably early stage in proceedings. There were, however, a mere 81 such titles this time last year, whereas this year, I make it 92 (not including retrospective titles long ago to have been released to theatres and home viewing, like Hal Ashby's legendary morose laugh riot Harold and Maude from 1971.)

Madman Entertainment, while still having secured distribution to as many as 23 of the following titles, have nowhere near so large a representation in the following table as they did in last year's; Madman titles accounted for a whopping 37% (30 out of 81) of films to have distribution lined up ahead of the 2011 festival. This has dropped in 2012 to 25% (23 out of 92).

This might help placate certain conspiracy theorists to have surmised on this blog last year that Madman's huge representation amongst last year's MIFF offerings carried with it a whiff of impropriety...

Now, while some of the films listed below may well be released very soon after MIFF, there can be incentives beyond bragging rights to attending their screenings at the festival, as, for example, when guests will be in attendance to conduct introductions, Q&As, flesh-pressings and so forth.

In the particular case of many of the Australian titles, there can be the added buzz of attending what will be hometown world premieres, which can generate a peculiarly electric atmosphere which no other viewing scenario can ever hope to match. Being at such a screening when it goes well is a particularly salutary experience. (Also, there may be a party afterwards.)

However, the converse also applies. Attending a local premiere when a film tanks, with cast and crew present, can be awkward and dispiriting, as with MIFF's 2010 curtain raiser, the yet-to-be-seen-again, may-in-fact-never-be The Wedding Party (d. Amanda Jane).

It is also true that some of these films may not be released for quite some time. Referring to last year's list, one of the 2011 MIFF's most outstanding offerings was undoubtedly Nuri Bilge Ceylan's mesmerising Once upon a Time in Anatolia, which was only granted a theatrical release within the last month or two. The wait then can be long.

Okey doke. Thems are caveats enough. On with the main attraction!

* 13.8.12 My apologies to the folks at Hi Gloss Entertainment; information published here previously pertaining to release dates for their titles was erroneous. I had DVD releases for the three titles of theirs listed here down for October but my original sources were evidently not really in the know; no DVD release date has, in fact, been scheduled yet for any of Italy: Love It or Leave It, Journal de France or The Minister. Two of these three titles (I'm not sure which two) are, furthermore, presently under discussion for theatrical release.

The table below has been adjusted to reflect this.

There are a few further updates which could yet be made to this table to reflect announcements made, and press releases issued, by various distributors and exhibitors over the last couple of weeks; time permitting, I'll get around to updating this table within the next day or two accordingly.