Of mothers and mants: some of MIFF days 9 and 10

I Killed My Mother

Director Xavier Dolan, recently turned but 21 years of age, is Hubert, the 16-year-old gay lead in this new comedy-of-sorts which begins looking for all the world as if it'll be utterly insufferable... but proves otherwise. 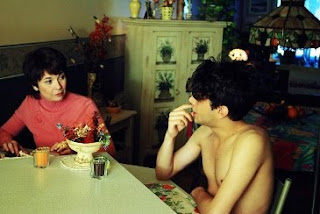 Hubert, for the most part, cannot stand his mother (Anne Dorval). Hence we are subjected to recurring shouting matches and antagonistic games of silly buggers between the two of them, often held within the incredibly dingy house they both call home. At least, I think it's dingy. It's a little hard to tell, because you can barely ever make out any of it. It's always extremely poorly lit, and I found it impossible to tell whether it's meant to be, i.e., whether it's a deliberate aesthetic strategy on Dolan & co.'s part, perhaps the better to plunge us impressionistically into the ever strained atmosphere of the household. Or, likelier, it's simply just very amateurishly lit, and a match then for the often very awkward compositions that plague the entire film.

Nevertheless, I somehow found myself interested in whether Hubert and his long-suffering mother mightn't be able to reconcile matters. Seems no amount of ostensible technical incompetence can rob a film of its heart, and I Killed My Mother, which gives every impression of coming from a very real place, has plenty of it. And there are some real laughs to be had, in close to equal weighting with the film's more histrionic elements.

In summary, then: a rather flawed film, but one which still has some appeal.

#1 festival guest Joe Dante gave a wonderful introduction to the underattended screening of this little known 1993 gem; I dare say he'd have given just as good at the Q&A afterwards as well, but, alas, I had to skedaddle to be sure to catch Hirokazu Koreeda's Air Doll (more on which, soon!) 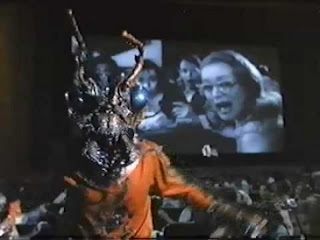 In the meantime, I thoroughly enjoyed this nostalgic trip back to a more innocent time, when the Cuban Missile Crisis was newly scaring the bejeesus out of Americans and, more importantly, multiplexes hadn't been invented yet!

Set in Key West, Florida, Matinee concerns itself with the intersection of the real world backyard scares of the missile crisis and the rather safer big screen ones of Lawrence Woolsey (John Goodman), an Alfred Hitchcock by-way-of William Castle-esque figure rolling into town to drum up business for his new gimmick-laden feature film, Mant!.

Mant!, viewed in snatches during the latter half of the film, is itself a rather wonderful creation, and one which would have done Roger Corman proud. It concerns a rogue man-cum-giant-ant, and brought home to me the fact that the happy hucksterish likes of William Castle long could have laid claims to have pioneered 'expanded cinema', and that it really oughtn't be considered the exclusive domain of the cinematic avant-garde, as some histories would have it... 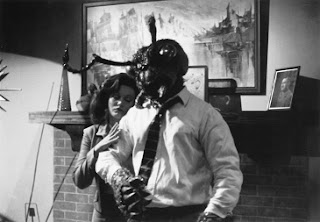 While the missile crisis is an important, well integrated backdrop to the film's narrative, and the sense of time and place are well established accordingly, there's no losing sight of what Matinee is chiefly about: the joy of going to the pictures in a bygone era when the cinema was king and there was no better, more fun place to go of an afternoon or an evening.

Oh! – and rhymingly happily with the gloriously daft Rubber, seen earlier at MIFF, a young Naomi Watts appears in a sequence parodying the anodyne Disney movies of the time, a sequence in which her character and her dapper but ineffectual boyfriend need not fear baddies, because her Uncle is a heroic, no-nonsense shopping trolley...


IN A SHORT ENGAGEMENT EXCLUSIVE TO THIS BLOG!