This blog just can't keep up with me...

I'd love right now to write at length about that wag Gaspar Noé's newie, Enter the Void, which I emerged reborn from a screening of but half an hour ago.

But really what I, if not this blog, most need right now... is a little lie down.

Fortunately, here's A Little Lie Down I prepared, and had all but ready to go live, a little earlier today, before realising I needed urgently make yet another cutting-it-too-fine, mad dash from Sunny Thornbury into the CBD to get to a screening.

So: a highly potted, Enter the Void-free account of my last few days' MIFFing will have to suffice for this post.


*
First thing this morning I dropped by the Melbourne Art Fair at the Royal Exhibition Building to participate in a live 'outside broadcast' of 3RRR's “SmartArts”, whereupon I did my best to cram my thoughts on a week's MIFFing just past, and on the festival's last few days just ahead, into a pithy, fun-filled 15 minutes.

Yesterday was my most demanding day of the festival, taking in Chris Morris' hilarious, knockabout suicide bomber comedy Four Lions in the morning (outside of MIFF proper, at a media screening), followed by all three-and-a-half hours of R.W. Fassbinder's extraordinarily prescient, made-for-TV production World on a Wire, which anticipates the narrative and metaphysical concerns – if not the fashions nor the pacing – of The Matrix and Inception, by 26 and 37 years respectively!

A quick soup and some fine company – both highly necessary – helped revive me for Koji Wakamatsu's Caterpillar, a harrowing and unapologetically unsubtle indictment of WWII-era Japanese nationalism, ahead of a festival highlight, Abbas Kiarostami's Certified Copy, about which I'll immediately trouble to say a little more.

Kiarostami's first feature made outside of Iran has seen a lot of people looking to Richard Linklater as a first point of comparison, citing, in particular, Before Sunset, and Before Sunrise before that, as belonging to the same gen(r)ealogical tree. I will pay that, but that sure ain't the whole story.

Certified Copy concerns a French antique shop owner (a fabulously skittish Juliette Binoche), and an English writer (William Shimell – a cross between Dustin Hoffman and Shaun Micallef) whose recent opus is an investigation into 'originality' in art. These two embark together upon a locquacious but increasingly fractious rambling Tuscan adventure. (A superbly shot one, I might add.) 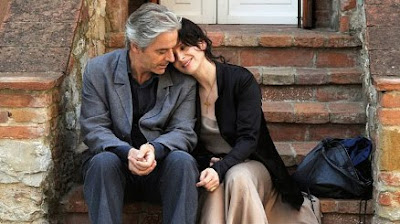 For all the film's superficial Linklaterishness, I think the cinematic figure Certified Copy most harkens back to – and here we might like to indulge ourselves with believing a small cameo from Jean-Claude Carrière is a clue – is none other than that rascally old surrealist, Luis Buñuel. For Certified Copy features one extraordinarily adroit piece of narrative sleight-of-hand that comes to assume positively Buñuelian dimensions, especially per Buñuel's latter day masterpieces, often co-written with Carrière, with their penchant for surreally skewering the lives, loves and lusts of their bourgeois protagonists through the imposition of whimsical flights of metaphysical fancy, ever taking gleeful great liberties with the earthbound conventions of that tired old warhorse, classical narrative.

Which isn't to say that Certified Copy isn't still every bit a Kiarostami film. Never mind that it's set in a world far removed from Iran and features dialogue in English, French and Italian. Its dialectical play with notions of originality and duplication/replication, which doesn't so much just permeate the narrative as metaphysically warp it, marks it as every bit as philosophically inquisitive, reflexive and hence, Kiarostamian, a work as any of his previously celebrated features.

I've plain run out of time again, and haven't even made mention of Peepli [Live], a highly discomfiting satire about Indian farmers living well below the poverty line, for whom suicide emerges as a good career move, as the government will compensate a suicide's family for their loss! Nor have I got to Jacques Rivette's latest, Around a Small Mountain, in which, as is commonly observed of Rivette's work, the play's the thing. I like to think I'll find time yet to come back to both of these, and more seen at MIFF besides.

Dagnabbit, I gots to go. The animation packages from a few days ago will also have to wait for another day to be granted their column inches here.

But meanwhile – Melburnians, see you over the last few days 'round the traps at MIFF!
Posted by Cerise Howard at 01:27