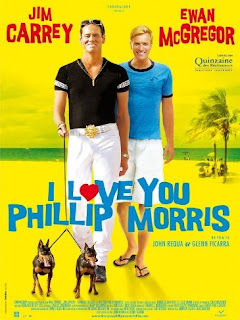 Time's against me, so I'd best make rather brief my account of a few films seen over two of the last three days at MIFF, though I might come back in a day or two to write a little more expansively on one or two of them, those as which most deserve it, none more so than would the first cab off the rank.

The highlight of the festival for me so far, an absolute revelation! I'd heard from abroad it was good; it's been in circulation, of a sort, for quite a while already. Locally, Roadshow has been sitting on it for months, apparently clueless as how on Earth to pitch to the mainstream so extremely black and unflinching a comedy, based upon extraordinary true recent events, as this, in which Jim Carrey and Ewan McGregor play lovers...

Carrey has never been better than as conman and escape artist nonpareil Steven Russell. McGregor, as Phillip Morris – the film has nothing to do with the tobacco industry – is greatly affecting as the object of Russell's madly, hilariously criminally expressed affections.

No film has pulled the rug out from under me so brilliantly – or with anything like close to as much chutzpah – as this in a long time. I'll be appalled if Roadshow release this straight to DVD; I Love You Phillip Morris is simply brilliant.

I thought Francis Ford Coppola's previous film, 2007's Youth Without Youth, was a dreadful load of old tosh. With Tetro as further evidence, I'm coming to think that Coppola may be going just a little bit mad, but I do have to concede that, barring Tetro's last half hour, when the wheels really come off, Coppola can still turn it on. For this rather strange tale set principally in Buenos Aires, of filial failings and inverted Oedipalism, is strikingly beautiful to behold, presented, flashbacks aside, in gorgeously crisp black-and-white 'Scope. And there really is no telling how the narrative, principally concerning a strained reunion between long estranged brothers (Vincent Gallo as Tetro, a mercurial failed writer, and Leonardo Di Caprio lookalike Alden Ehrenreich as virginal little brother Bennie), will pan out. While this is for the better for its very intriguing first hour-and-a-half, it's for far the worse in its utterly daft last half hour. Still, I'm very glad I rose above my doubts and bothered to see it. (And you can never include too much of Powell and Pressburger's The Tales of Hoffmann in a film.)

Although a Czechophile, I am far more conversant with films from the dizzy heyday of the Czechoslovak New Wave than I am with those of one of the Czech Republic's most celebrated latter day directors, Jan Hřebejk. I'll be concertedly looking deeper into his earlier work shortly, most impressed as I, and a few fellow Czechophiles, were with this multi-stranded, cleverly flashback-free, Lives of Others-inspired current day look back into pre-Velvet Revolution Czechoslovakia.

Its title refers to a complex origami creation, which, while having some direct narrative significance within the film, is more meant as a metaphor for the many layers underlying the reality of life for those now thriving in a post-communist state but whose earlier lives may have been marked with fateful compromises and Faustian pacts.

Atop its many other merits, it's a terrific film for a learner of Czech, with a wonderful final sequence marked by a thesauran explosion of insults that one character had long wanted, with good reason, to hurl at another. I'll be looking to grab this one on DVD when Madman get around to releasing it locally, the better to learn the Czech for “fuckwit” and “rotten cunt”, without which my life, and in particular, my Czech vocabulary, is sadly incomplete.

I didn't much care for this semi-mockumentary investigation into the little-travelled revolutionary film theories of North Korean despot Kim Jong Il, which accord with the “Juche” ideology first expounded by his equally lunatic father, Kim Il-sung. I found it messy, nowhere near as funny as it thought it was, and ultimately rather tiresome. Its best moments were when footage from North Korean films (and television?) was left to speak for itself, rather than when anti-capitalist mock-Kim-isms were given to a faux documentary subject – a woman purporting to be on a Juche arts residency in North Korea (as if!) – to blither to the camera.

In its favour, it did feature fabulous footage, all too briefly, of a woman juggling three live doves, one of the strongest and strangest images of this year's MIFF.
Posted by Cerise Howard at 16:00