Of maladies affecting humans and festivals: MIFF days 2 and 3

Perhaps it's better to fall sick at the very outset of MIFF, rather than in its midst, as has long been my custom. The administrative chaos that seems invariably to plague the festival's first weekend, and the day or two prior, is probably best engaged with to a minimum anyway, even if, as a veteran festival-goer, I usually know how to side-step some of the worst of it. A quick catalogue of problems besetting the opening weekend would have to include, but not be limited to, an alarmingly wide variety of projection mishaps; films running hopelessly out of kilter with the schedule; unannounced switchings of cinemas for concurrent screenings; the festival club being shut when it's expected to be open; and, worst of all, evidently dreadful communication to the poor folks at the coalface, those kindly volunteers who have the unenviable task of tending to all those stroppy punters when armed with too little information to effectively defuse matters and tempers.

A factor in the chaos especially evident at the Greater Union cinemas on Saturday night is the dreadful oversight in omitting from the program details of guests' attendances at screenings for introductions and Q&As. Not just because, natch, that information is of interest to everybody attending the festival – and can be a dealbreaker with respect to choosing one session over a simultaneous other – but also because a session's running time is greatly impacted upon by the presence of a guest, something which is helpful to factor in when booking back-to-back sessions in advance.

For if ever there's a session that will run overtime, leading to timetable blow-outs and the end of one session overlapping the start of another, and consequent high dudgeon, it's one where there's a Q&A running... more so when it's hot on the tail of the same. Forewarned would be to be forearmed.

Instead, what ought to be a leisurely, even festive, traipse from one cinema to the next, and to the next, and to the next, undertaken in good company and with a comfortable velvety cushion of time between each, soon becomes a series of stressful, solo sprints from one dodgy Greater Union cinema to the still litter-strewn next, with planned rendezvous falling by the wayside all along the way, each with their own fallout to have to deal with down the line, and the still warm corpses of wholly good-hearted, well-intentioned, trampled volunteers riddling the corridors at every turn...

Alright, I may have taken a little license in that last paragraph. But would you begrudge me that after what I've been through? Would you?

Enough griping and histrionics. Onto the films seen at MIFF over the weekend.

The Housemaid (with director Im Sang-soo in attendance) 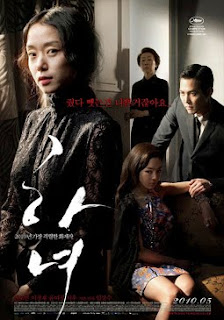 Mr. Im sure is one assured filmmaker. I really admired his 2005 political thriller, The President's Last Bang, and I suspect his latest is as strong a narrative work as I'm likely to catch all MIFF. A reworking of Kim Ki-young's revered 50-year-old film of the same name, The Housemaid gives us a glimpse of life as experienced by South Korea's ultra-rich elite, whose money, they believe – just as everywhere else – gives them license to make problems simply disappear, even when those problems run to unplanned pregnancies consequent of the father of the house knocking up the hired help.

The film ends in the most extraordinary fashion, with quite the unexpected double-whammy. A most unexpected form of revenge is chased down with a hallucinatory, fish-eyed bit of culture-crossed weirdness, and I almost wish Mr. Im hadn't been there to illuminate (!) the symbolism of these final two scenes. Sometimes things are best left a mystery, or at least left to chew over for a while afterwards.

Survival of the Dead

Better than 2007's Diary of, Survival of the Dead is still pretty throwaway. Credit to George Romero though for being able nonetheless to generate a couple of good startles that ran right through the entire audience. Tellingly, though, neither were generated by the appearance of zombies.

Social commentary about the pointlessness of allowing feuds to span generations aside, Survival was played mostly for laughs; seems there are still more ways to skin a zombie. But Survival just can't be taken very seriously, and knows it; hence one particularly risible reveal late in the piece that you almost have to admire, for all its dreadful brazenness. 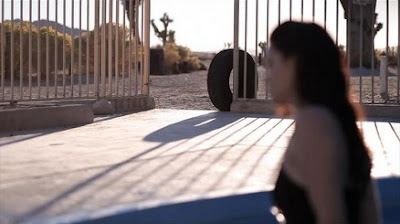 Ah, now this is the very stuff of film festivals, where truly original works, rare though they are, can surface and find an audience to champion them. Quentin Dupieux' Rubber is a film-within-a-film, with an audience within the film viewing that film-within-a-film through binoculars... What they're watching unfold is a story recounting a few dramatic days in the life of a lovelorn, psychokinetic killer tyre. No, really.

Enlivened by a high body count ever ascending the food chain, Rubber is hilarious, and even its occasional longueurs work to its advantage, as each new outrageous, often highly reflexive plot development catches you completely by surprise. Very original, very clever and very, very silly indeed, I adored Rubber. It's to my 2010 MIFF what Stéphane Aubier and Vincent Patar's A Town Called Panic was to last year's. Wunderbar!

Jean-Luc Godard nowadays holds the unusual distinction of being both able to fill, and, not long after, empty, a cinema, quicker than any other filmmaker on the planet.

Still stricken with a cold, I didn't head to MIFF at all by day on Sunday, saving all of my strength for a 7pm screening of that impossibly smug, humourless, curmudgeonly old fuck Godard's latest exercise in obfuscatory intellectual bully-boyism.

Having had only a little time to reflect upon it, I right now rather wish I hadn't bothered with it at all. Especially as it so drained me that I didn't feel I had the energy to watch the only MIFF screening of Ben Russell's Let Each One Go Where He May. I was very taken by his experimental works at MIFF in 2008, but opted instead to head across the road, to a sleepy festival club, to cheer myself with good company and a couple of medicinal glasses of extortionately priced house red. Now that was a couple of hours well spent – cheers Tara and Richard! 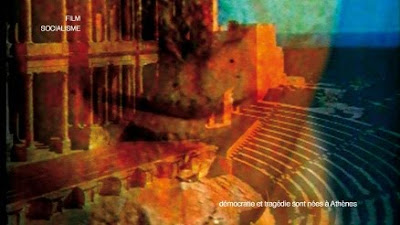 I really can't be bothered giving Godard the benefit of the doubt, as do so many others, and trouble to give his latest (last?) film multiple viewings down the track (ideally, I expect, after crash courses in as many as three or four other languages), in order to make sense of this latest clusterfuck opus. Instead, I'll give a quick account of those few elements of the film I could glean some pleasure from in the then-and-now of last night: some beautiful HD cinematography aboard an ocean liner and looking out to sea; all manner of textural play with the digital medium and its variable coarseness; an on again, off again soundtrack intriguingly panned to extremes; the appearance of Patti Smith, two kittens, a llama and a mule.

The whole well publicised business of the reduction of the subtitles to the merest, most pidginesque approximation in English of some things voiced on the soundtrack is not a manoeuvre I'm about to exalt any time soon.

For those who'd like a little more meat and less gristle to a consideration of what might be Godard's swansong, head to the ill-named but essential MUBI (né The Auteurs) for coverage of Film Socialisme every bit as exhaustive as I found it tiresome. Give me the Godard of Weekend (1967) over his latter day Joycean cine-logorrhea any day!
Posted by Cerise Howard at 17:04