I took all of Monday off – from work, from MIFF – the better to rid myself of an all too common cold. It still hasn't completely left me, but I felt more myself come Tuesday, and saw the following three films, with only a minor online ticketing glitch running interference. Certainly my Tuesday's MIFFing ran an awful lot more smoothly than the weekend's just gone. 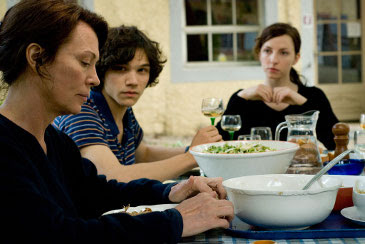 In which the backbone to a skeleton rattling itself into a frenzy on its way out of a closet adopts the form of a capricious, increasingly tiresome young woman hellbent on inflicting as much psychological damage as possible upon a woman and her family whom she has never previously met.

I didn't care very much for this German potboiler, although I have to say it held my attention until its rather flat ending. It's just that its drama was all played to too histrionic a pitch for my tastes and consequently I really couldn't warm to the characters, nor ultimately much care about what made them tick, what had made certain amongst them do possibly terrible things which they might have covered up for many a long year, nor care overly about what they would do upon the disclosure of these matters.

The singular new Hungarian film Bibliothèque Pascal (d. Szabolcs Hajdu) begins looking for all the world like it'll be a heavy kitchen sinker, with half-Romanian, half-Hungarian Mona (the striking Orsolya Török-Illyés) having to relate to a probably well-intentioned beardy Hungarian bureaucrat just what misfortunes befall her such that she had to abandon her little girl, leaving her in the care of an abusive aunt, from whom she'd like to retrieve her. 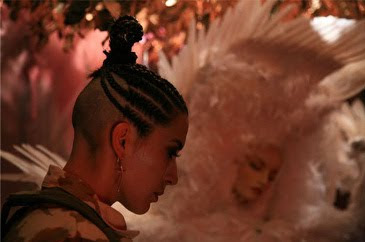 It's a fascinating film full of great characterisations, disturbing scenarios and eye-opening flights of magic realist fancy. Special mention should be made of Shamgar Amram, a more handsome but equally charming Alfred Molina in the role of Pascal, the proprietor of the eponymous Liverpool-based sex club which the Mona of her own story finds herself transported to, and veteran Romanian actor Razvan Vasilescu as her story's Mona's unconscionable but charismatic father.

Alas, I saw Bibliothèque Pascal all on my lonesome, and, as much as I'd like to, I haven't yet been able to chew it over with anybody else. A not uncommon festival malaise.

For me, part of the greatest pleasure of a film festival comes from those too rare times when a film is seen, and digested, in company that significantly enriches and elevates the filmgoing experience. Sometimes such occasions are wholly serendipitous; other times, as with this, they are the result of some good forward planning.

On learning a few weeks ago there would be some films in this year's MIFF of interest to Melbourne's Czech community, I got mobilised. I passed on details of the pertinent sessions to my Czech teacher, who in turn passed them on to the rest of her students and to other interested parties and, before long, she had organised quite the MIFF-bound posse. 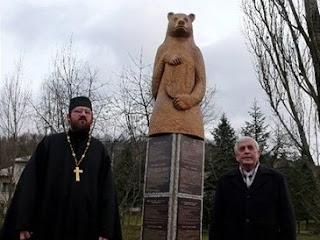 Seeing this documentary on Osadné, a tiny and remote Slovakian village, becoming even less populous with each passing year, en masse – and enjoying a pilsner or two with a few fellow Czech- and Slovakophiles afterwards – was a very happy conjunction of a quality film and perfect company to share it with, making for my most enjoyable experience at this year's MIFF so far.

Osadné is a very wry look at a little village on its last legs, focusing principally on its leading movers and shakers: the 36 year-incumbent mayor of the town; its Orthodox priest, and a Rusyn activist keen to see his ethnic minority's culture live on in this tiny hamlet where most of the inhabitants are of Rusyn stock.

Over several months, plans are made – and even in part realised – to put Osadné on the map, involving bringing its charms to the attention of the bigwigs in Brussels, and hopefully, in turn, luring some of those same bigwigs, including one-time Czechoslovak cosmonaut Vladimír Remek, to Osadné in the hope that they might bestow some EU largesse upon it, such that they could build a "chapel of grief" there: a surefire, revivifying tourist attraction!

There's a lot in Osadné that's really very sad, but it's a very humourous and affectionate documentary too. A small film, to be sure, but one highly recommended, and one seen with the more folks hailing from, or, like me, obsessed by, that part of the world, the better.
Posted by Cerise Howard at 13:24