Cinema Oneirica, or: A Few Musings on Inception and... Jess Franco!

Sure, MIFF is due to start in only two days, but my film-mind is wandering across other fertile ground just at the moment. I caught Inception, the blockbusting new Christopher Nolan flick, just last Friday, and both do and don't want to write reams about the experience RIGHT NOW.

With respect to holding back, my first consideration is one of timeliness. Firstly, Inception isn't released in Australia until Thursday, and while this isn't an issue in this particular case, part of the pact we make with publicists in attending previews of films is that we are sometimes asked not to go public with our impressions until the day of release, so that a film isn't 'spoilt' for its prospective audience.

(Should this really still be a concern in this day and age, when mountains of spoiler-riddled commentary on any film is almost invariably available online ahead of, or at least, coinciding with, its Australian release anyway? Still, mine, in this post, is not to question why.)

Secondly, and more strongly, I'm not sure how I feel about possibly spoiling things for myself, in so much as I have another, far longer established, outlet for my film criticism, and that's a fortnightly spot on “SmartArts”, Richard Watts' arts behemoth on Melbourne radio station, 3RRR, and I want to ensure I still have some original thoughts on the film left in the tank to surprise us both with come our discussion of it this Thursday, when I'm next on (around 11.30am AEST). Perhaps it's a foolish fear, but I worry that if I commit all my thoughts on Inception to this blog right now, I'll have too few fresh ones come Thursday to a) make for good radio and b) avoid repeating myself, lest anybody should find themselves reading this and tuning in to SmartArts.

I will, though, on the subject of Inception, say this straight away: I really want to see it again. For, like another film I've just watched and which, for good reason, I'm about to allow to hijack this post, Inception's is a most unreliable narrative. For the time being, I can only conjecture as to whether further viewings, with the advantage of foreknowledge of the film's universe, and of that universe's laws and logic as spelt out in the film, will lend themselves to a 'definitive' interpretation of the film's consensus reality-bending narrative. Never mind that the film has action sometimes unfolding 'simultaneously' upon multiple planes of dream/reality (it is in fact surprisingly not disorienting in that respect); what is hard to pin down is whether the narrative as a whole is unreliable, and indeed, whether it may even be organised along something of the order of a Möbius strip – just like Jess Franco's 1969 film Eugenie... The Story of Her Journey into Perversion, aka (the Marquis de Sade's) Philosophy in the Boudoir, of which literary namesake it is an adaptation. 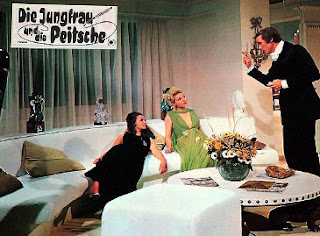 It's not these films' debatable endless loop-iness I want to dwell upon in pointing this post's focus now more onto Eugenie. I do though want to harp on for a bit about this business of representing a dream-state on film. For while Inception presents us with a great wealth of narrative development situated expositorily within lucid dreams – dreams probably more (narratively) lucid than any presented cinematically before – Eugenie actually feels like a dream throughout. Inception does not; it feels like an extremely intelligent, serpentine blockbuster, a veritable Matrix for 2010.

At least, Eugenie feels like that to me, and I pointedly concede it might much less so for a Franco novitiate. Many first, second or even third-time viewers of Jess Franco's films often hurriedly have very disparaging things to say about his merits as a filmmaker. But therein also lies my point, for part of what made Eugenie so compellingly oneiric for me a couple of nights ago is that, unlike Inception's narrative-contained dreamweaving, Eugenie's oneiricism is, to the Jess Francophile, not the least bit contained. In fact, its oneiricism is far more than it alone could ever dream of containing. And that's because for the true Francophile, one Jess Franco film is every Jess Franco film bleeding into every other Jess Franco film. It's the auteur theory manifest, pruriently running amok with its head cut off.

Watching Umbrella's local Region 0 DVD release at home, Eugenie had not long started when the familiar repertory figure of Paul Müller lanked into frame, instantly exuding an opaque ulterior motive from which little good would presumably come to somebody... . And why, it could have been that he'd just walked in off the set of any one of a number of his many other seedy Franco collaborations from around that time, like, perhaps... Eugenie De Sade (another fine film, one of Franco's Soledad Miranda starrers c. 1970, and not to be confused with this film... or is it?... In fact, can it possibly not be?)

And in Eugenie's creepy black mass-like introductory sequence, with Christopher Lee sombrely, but menacingly, liturgising words straight from De Sade, did I not spot the director himself, who pops up, often unflatteringly, in any number of his other works? Did not also a wonderful Bruno Nicolai soundtrack enliven the film throughout – jaunty one moment, sinister the next, sinisterly jaunty but a scene, a flogging and a quick costume change later, not unlike in countless other Franco flicks? Those, that, is, not the better instead for a gorgeous Daniel White score, like Female Vampire (1973), which, come to think of it, featured Jack Taylor, who appears in Eugenie, as well as in Fritz Lang's favourite and one of mine, 1968's Necronomicon, to name but three of Taylor's many mad Franco dalliances. Klaus Kinski pops up, bewildered, in a fair few too. Howard Vernon. Antonio Mayans. Maria Rohm. Susan Hemingway. And Lina Romay. Lina Romay! Franco's post-Soledad Miranda muse, and life companion, lets rip in... I doubt even they know how many they've made together!

What I'm driving at is: once you've become a little au fait with Franco, once you've seen at least, say, a handful of good 'uns from amongst his 190 or so title-strong filmography, and have become... fond of them, then a cumulatively greater oneiric impact is brought to bear upon the viewing of each and every subsequent one. For to watch another Franco becomes akin to returning to a dream, to variations writ upon a recurring dream template, replete with countless recurring figures, recurring names, recurring themes, even whole recurring narratives (for in his heyday Franco never tired of remaking and re-imagining his previous films after a fashion as repetitively Sadean as many of his films' protagonists; hell, he was even often shooting several films at once, ever ensuring further extratextual slippage). It's just a matter of a little Freudian displacement and one Franco film is in fact the next.

Franco's is a true cinema oneirica. Granted, it probably isn't for everyone. It sure as hell ain't PC. But the whole, perverse, wild, wide world of Jess Franco's cinema isn't really that big a leap from the brainy Hollywood blockbuster of the moment, and it's much better to dance to to boot. Go on, you Franco virgins... take a bite! And then, like me, lament that nobody ever presents – ever dares present – his stuff on the big screen here.

Alas, Melbourne still has a conservative streak a mile wide, but while it seems unimaginable that any festival or institution will ever present a Franco retrospective here, consider this: he received a Spanish Lifetime Achievement Academy Award just last year, and the year prior, the Cinémathèque française ran a six week long season devoted to his work, which, it being Franco, nevertheless can't even begin to lay claim to being exhaustive!

Still: Viva Umbrella! For releasing several lovely restorations of his films on DVD. It's great to be able to pick a few of 'em up for a song hereabouts, go home and marvel at them, and to enjoy all awhile a nice little lie down.

PS The Franco hijack of this post notwithstanding, I really loved Inception. Loved it a lot.
Posted by Cerise Howard at 01:48