In the interests of maintaining a semblance of a resumption of usual services, and lest anyone fear this blog be taking a turn for the moribund, please find following a (one) blog post appertaining to the cinéphilic life in Melbourne, Orstraya, as given due consideration by an eagle owl, the film buff's spirit guide, etc etc yadda yadda blah, with all due apologies for the delay, consequent in some small part to a birthday had, against one's wishes and against one's better judgement, the week prior, and all the all-engulfing hoopla attendant upon it – ticker-tape parades, audiences with foreign dignitaries, a few drinks too many at The Tote chasing down a colossal Czech feast, and whatnot.

But life hasn't, these absent last two weeks, been all beer and skittles, overcoming a bout of pleurisy and delusions of grandeur. I've busied myself playing my behind-the-scenes part in letting loose into the world a new edition, #28, no less, of the venerable Melbourne-based film journal, Screening the Past. (Its first issue, long before my involvement began, emerged in 1997. 1997! Just imagine! – film had then just barely itself been invented, never mind the Interwebs!)

What's that – films? Yes, I suppose I've still found time to see a few of those lately. Blathered about some of them on the radio a bit, too, both today just about gone, and on the Thursday a fortnight prior. 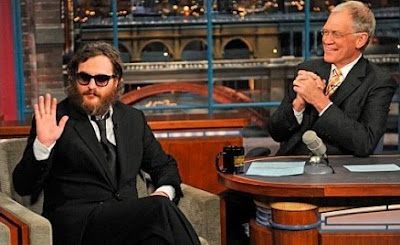 Today's blatherings principally concerned the mock-mockumentary I'm Still There; Wall Street: Money Never Sleeps, and the very slight, but fun, The Extra Man. The lukewarmth I felt towards all three of these productions may not have been the stuff of scintillating radio. I'm not sure.

Whereas a fortnight ago my on-air focus was fixed on MIFF alumni The Killer Inside Me; Lebanon, and the wonderful Boy, along with the Message Sticks Indigenous Film Festival, and in particular its bringing to Melbourne the superb Reel Injun, a documentary investigation of the relationship between Hollywood and American indigenous folk, from the days of proto-cinema to very near to the current day, and not merely restricted to the depiction of native Americans in front of camera but, crucially, shining a light on their longtime involvement behind it as well.

Alas, I've neither the time nor the energy just now to wade in anywhere near as deep as I'd like in waxing critical upon all of these and other things to have unspooled before my beady, bloodshot little eyes these last sixteen days.

Why, I'm fatigued too from devoting energies and hours to under-the-bonnet tinkering for, would you believe, another august Melbourne-based film journal, Senses of Cinema, whose colossal archive is, by degrees, being migrated, in no small part by yours truly, into its mostly spanky new content management system. I have just today flicked a switch ensuring Issues 38 through to 51 – 750 wonderful articles on film in total, a few of which are mine – now seamlessly appear only at the 'new' site.

That took quite a bit of doing.

Still, in these last umpteen days, I've nonetheless also managed, remembering... the canon is my friend, the canon is my friend... to get along to big-screenings of Melville's Le Cercle Rouge and Visconti's Rocco and His Brothers, both long overdue. (Mental note to self: Inaugurate “A Little Lie Down vs. The Canon” in a future, in-depth post.)

And I've committed to writing a review of William Beard's Into the Past: The Cinema of Guy Maddin for the next issue of Screening the Past. As an ardent admirer of Maddin's fruity films, this commitment must, atop reading Beard's account of Maddin's entire filmography and his analysis of the Winnipegian's arch and antediluvianist practices, needs occasion several viewings of Maddin's films. Hurrah! I only have so many about the house so, whilst tracking down others to bring into my home to watch, I have also treated myself to a few short Švankmajers to tide me over. (He is a kindred spirit and genius, surely! If one with nothing much really in common.)

And, to wrap, it's now to pause to note the passing of some true greats. 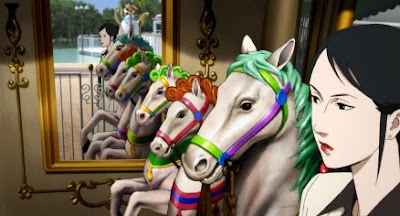 Satoshi Kon: much, much too soon! I adored Perfect Blue from the very get-go; notwithstanding that it's an anime, it's one of the greatest gialli of all time. And Paprika. Paprika! What a magnificent great cavalcading headfuck that film is; Inception Schminception! Millennium Actress, viewed for the first time upon learning of Kon's death, is very good too, if played in a wholly different register to Perfect Blue and Paprika...

Which reminds me... a party I was late to just last night is Centre Stage, Stanley Kwan's wonderful 1992 tribute to iconic 1930s Chinese actress and suicide, Ruan Ling Yu, in which Maggie Cheung plays Ruan as well as herself, and in which much original footage from Ruan's work appears, along with re-creations, in which respects it was very appositely double-billed by the Melbourne Cinémathèque with Irma Vep, Olivier Assayas' valentine to Cheung, in which she plays 'herself' essaying the lead character, in front of, and away from, the camera, in a deranged director's (Jean-Pierre Léaud, having a grand old time) remake of Louis Feuillade's Les Vampires...

Which is, at length, by way of saying that Kon's Millennium Actress reminds me, for all the right reasons, of Centre Stage. Pending an abundance of spare time, I will write about this at length.

Vale also fellow Japanese animator Kihachirō Kawamoto, whose stop-motion puppet works drew from Japanese folkloric traditions as well as from the inspiration and tutelage of Czech puppet maestro Jiří Trnka. He did at least live though to a ripe old age.

And, lest I forget, it's farewell too to Claude Chabrol, one of the principal kickstarters of the French New Wave, all of whose films I've so far seen I have enjoyed, all of them enough to know that I ought to have seen still more of them. Ain't that often the way?

Right. That'll do for now.

In anticipation of a proper resumption of usual services shortly,