Post-MIFF, and more particularly, post-Friday the 13th, when my beloved little cat became an ex-Pushpaw, August has been a trying time indeed.

That's not to say I've been denied the pleasure of seeing films, although, alas, I've almost as good as missed attending as many as three whole film festivals (the Indonesian Film Festival; the Melbourne Underground Film Festival, and The Other Film Festival) due to my faltering health and energies.

Ahead of that fateful 13th day in August, I did at least get to a media preview of The Other Film Festival and so can offer some thoughts on a few films to have screened at TOFF, if not on the festival experience, per se. 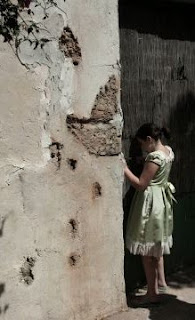 That said, I am disappointed to have had so limited an engagement with the TOFF this year as a) I worked for the festival a few years ago and enjoyed, and gained from, the experience tremendously and b) the festival, with its focus on “cinema by, with and about people with a disability”, both screens material acknowledging, and indeed celebrating, “otherness”... of which I am a fan..., as well as acting as (one hopes) a harbinger of a more utopian future where cinema is for, and accessible by, everybody, not just those boasting a full complement of senses, the capacity for autonomous bipedal motility and an at oneness with consensual reality, like I often am.

The good folks of The Other Film Festival have a dream, a dream I tells ya!, and, more importantly still, take measures through their own fine example to demonstrate that that dream can – nay, should – be a reality.

My TOFF films seen, then:

Rita (d. Fabio Grassadonia & Antonio Piazza)
A very fine 18 minute-long Italian short which does wonderfully well in communicating something of the experience of the blindness of its titular character, a strong-willed, ten-year-old girl (Marta Palermo), principally through a combination of effective sound design and strategically keeping the camera trained upon her highly expressive face for all of the film's housebound first act.

The second act begins when, heard well before he's 'seen', a bloodied intruder enters Rita's house, and one can't help but immediately fear the worst for the very vulnerable girl; any number of horror films previously viewed condition one to fear for any character claustrophobically framed, as here, when there are ominous bumping noises emanating from outside of the frame, even before matters of blindness are taken into consideration.

However, the intruder's visit ultimately proves a good thing... possibly... in an ambiguous, 'be careful what you wish for' sort of way. 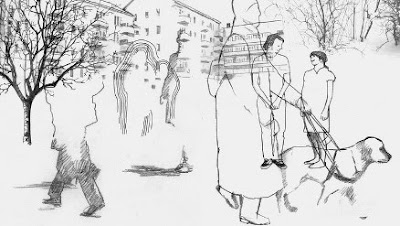 A semi-animated short which, like Rita, goes some way to convey the experience of blindness, in this instance portraying it as a synaesthetic affair. The narrator (Hege Norset Blichfeldt) explains how she perceives the world as a soundscape in which objects and people within it emit “sound-shadows”, enabling her to negotiate her environment. Pencil-drawn outline animation, sometimes superimposed over real-world backdrops, helps visualise for the seeing-unimpaired that which the narrator cannot see, as we understand it, for herself. A lovely piece of work.

The Sunshine Boy (d. Fridrik Thor Fridriksson)
A feature-length Icelandic documentary on autism narrated by Kate Winslet. It chiefly concerns the quest of an Icelandic woman (Margret Dagmar Ericsdottir) to better understand, and hopefully improve the lot in life of, her nonverbal, autistic 11-year-old son, Keli. To which end she and he travel far and wide, spending a lot of time in the United States and interviewing many experts in the field before ultimately finding some joy through the “Rapid Prompting Method” developed and practised by Soma Mukhopadhyay in Texas.

While the film feels a little like it could benefit from a bit of trimming, there's no denying the power of the film's understated but nonetheless triumphant close, wherein Keli, by degrees, demonstrably comes to be able to express himself, to communicate interests and desires that would not otherwise likely ever have been expressed, let alone met.

Sigur Ros and Björk feature on the soundtrack, which is of course no bad thing. And admirers of Errol Morris' “First Person” series, ca. 2000/01, will welcome hearing once more from the marvellous Temple Grandin, autistic inventor of humane slaughterhouses.


*
Post Friday the 13th, Pushpaw's passing echoed wherever I went. 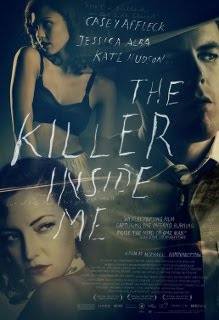 I've not read Jim Thompson's 1952 novel, but it's hard to imagine it could be any much less pleasant a stroll through the mind of a psychopath, portrayed in Winterbottom's film by Casey Affleck. Affleck's performance as Deputy Sheriff Lou Ford is chilling, to be sure, and his graphically beating to a pulp Hollywood lovelies Jessica Alba and Kate Hudson is just about every bit as shocking as what Gaspar Noé inflicted upon Monica Bellucci in Irreversible, Michael Haneke upon Naomi Watts in his US version of Funny Games and Darren Aronofsky upon Jennifer Connelly in Requiem for a Dream. There is an undeniable and inflated horror and astonishment in seeing beautiful, established stars, rather than mere nobodies, having horrific things meted out to them on the big screen. And doesn't Winterbottom know it! We are spared nothing.

The Killer Inside Me packs quite a punch, and ends strangely and strongly (with perhaps a tip of a Sheriff's hat to a certain illustrious Robert Aldrich noir classic), even if its protagonist's psychopathology is explained away in a fairly pat fashion (albeit one, I suppose, generically satisfactory).

Winterbottom continues to startle as one of the most protean and fearless filmmakers going, but let no-one tell you The Killer Inside Me is anybody's idea of a good time waiting to be had.

The following night it was off to the Melbourne Cinémathèque to catch the Alain Delon double of Plein Soleil (René Clément, 1960) and La Piscine (Jacques Deray, 1969). I had seen neither before and had read up only a little on them, so knew not really what to expect.

So, of course, wouldn't you know it, both come to feature Delon murdering somebody, though the deaths this time are, in both films, a darned sight less graphic – and a good deal more watery – than in The Killer Inside Me.

I don't really feel like writing expansively on either other than to say that a) both were made in a time of higher pants and b) La Piscine, boasting charms additional to Delon's surfeit courtesy of his real-life ex, Romy Schneider, as well as a young and gawkily beautiful Jane Birkin, is an absolute cracker... up until when the police are called in, late in the piece, subsequent to which point everything just drags. At that stage in the film, the only good that could come of introducing Mr. Plod to proceedings would be to have him summarily dispatched too... 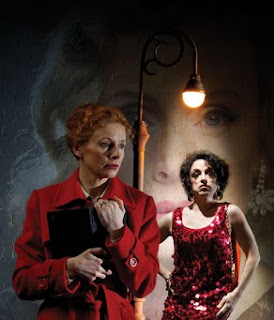 Death even infiltrated my following night's trip to the theatre, though this time it came as no surprise when it showed its spindly narrative hand. I was joining my dear friend Richard Watts at the Opening Night of the Melbourne Theatre Company's production of All About My Mother, an adaptation of my favourite Pedro Almodóvar film, and one in which much of the narrative hinges upon a pedestrian being clocked by a passing car. (Sigh.)

Sadly, All About My Mother was highly disappointing. I had presumed to give it the benefit of the doubt; the adaptation was said to have come with Almodóvar's blessing and the original is heavily concerned with matters theatrical in the first place.

From the very opening, things were a bit amiss. Alison Whyte, in the lead role, gave her Manuela a bizarre, plummified Australian accent... oh if only she could have sounded a little more European, any sort of European!

This accent robbed her character of believability and gravitas, and jarred all the more when she shared scenes with certain members of the rest of the cast who did adopt some sort of Spanish accent. (Whyte once or twice did, perhaps accidentally, ostentatiously roll an 'r' – which just made matters worse.)

This wasn't the least of its problems, however. The idea to have Manuela's son posthumously moping around the stage for most of the play's duration was surely an ill-conceived one. Even sillier, he silently interacted once or twice, apropos of nothing, with some of the living characters. I felt for Blake Davis, the young man who landed that largely thankless and, frankly, quite embarrassing, part.

Of course, Paul Capsis is always going to be entertaining, and he is perfectly cast as tranny hooker-with-a-heart-of-gold Agrado. However, there really was no need whatsoever to have Agrado's addresses to the audience exist outside of the narrative; they had been perfectly integrated within it in the film. 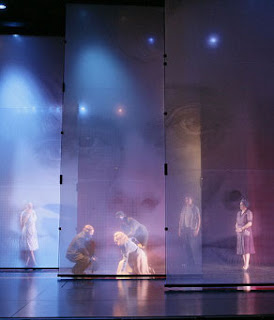 And, while the first half held me, notwithstanding all of my reservations already outlined above, the arse fell right out of the whole production almost immediately after the intermission; the play's rhythm was gone, gone, gone. And not because of the intermission; the problem was that the second half began with an abrupt shift of mood, all easy laffs and camping it up, which just utterly smothered the following serious narrative developments.

There were some positives; I didn't mind the layered mobile screens that, three deep, inhabited, and subdivided, the stage throughout – screens in the double sense of being canvases for projections as well as being coverings behind which actions – diegetic and 'behind-the-scenes' – could be strategically unseen, or seen, to occur.

Wendy Hughes was fine too.

Let's hope though that the production of John Cassavetes' Opening Night, at the forthcoming Melbourne International Arts Festival, makes for rather more successful a theatricalisation of an already 'theatrical' film.


*
And that will about do for now. I'm tired, pleuritic and cranky as I type this, but will commit to putting August properly to bed within the next few days, probably just after my Thursday's contribution to 3RRR's SmartArts (11.30 Melbourne time (GMT+10:00)), during which I'll no doubt talk about a few of the things I didn't get around to covering in this post, as well as this year's Message Sticks Film Festival.