Of content elsewhere, new and old, and more on MIFF releases

With but five further days to go of the 61st Melbourne International Film Festival, folks who missed it going live to air might like to do some catch-up listening to last Thursday's hour long "Max Headroom" MIFF special on Melbourne radio station 3RRR, in which I and estimable fellow critics Tara Judah and Josh Nelson set the 61st MIFF to rights, alternately waxing laudatory and scornful about umpteen of the festival's big screen offerings and various peripheral matters.

(A bonus? - seldom can Kylie's "Can't Get You Out Of My Head" previously have been heard to emanate forth along the airwaves from Melbourne's legendary independent community radio station nonpareil, but it did, and, what's more, in context. Who'd ever hitherto a-thunk it?)

Speaking of 3RRR and Max Headroom specials, and with ACMI's thorough Guy Maddin season not long come to a pre-MIFF close, here's reminding y'all of the hour long "Max Headroom" Guy Maddin special I, fab fellow critic (and, latterly, MIFF's Next Gen & Shorts Coordinator) Thomas Caldwell and ACMI programmer and season co-curator Kristy Matheson perpetrated back in late June, replete with many minutes of interview gold contributed by Maddin himself. It's still available "on demand", courtesy of 3RRR, for another few months. 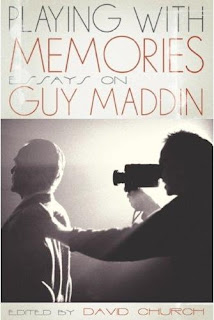 (Here's reminding you too of the double Guy Maddin book review of mine in the Senses of Cinema before last, the better that you, whether an old or a new convert to Maddin's singular cinema, might want to deeper immerse yourself in (critical writing on) critical writing on Winnipeg's finest and most delirious filmmaker.)

Speaking of Senses of Cinema, issue #63 finally emerged at the very end of July and with it, my festival report "The South’s Not Long for This World: The 26th Fribourg International Film Festival", accounting for my 3rd trip to this terrific Swiss film festival in beautiful, principally francophone Fribourg and my first experience as a member of a FIPRESCI jury, something I'm still savouring. Maybe everyone who lands one of these gigs is as lucky as I was (though I doubt it), finding themselves working entirely with altogether lovely, super smart and highly collegiate fellow critics; mad props and shout-outs go out to fab fellow jurors Sheila Johnston (President, Great Britain), Hauvick Habechian (Lebanon), Katja Čičigoj (Slovenia) and Nina Scheu (Switzerland) - wotta team! May that we all be reunited somewhere, sometime, and were that such a thing were possible here in Australia, where such juries, with all their exciting, horizons-expanding internationalism, are nowadays almost unheard of. (Grrr, argh.)

Moving on, in my last post (lawks, has it really already been a month?), I neglected to plug something I put out into the world, which, I'll concede, is unlike me. I refer to my guesting on the May 2012 edition of Hell Is For Hyphenates, in which I join HIFH hotshots Paul Anthony Nelson and Lee Zachariah in poring over the ever astonishing film work of my pick of a filmmaker to focus upon, Czech Surrealist Jan Švankmajer, after a precursory gloss over a few recent releases and a consideration of the sometimes vexing matter of film remakes.

Oh, and while we're on matters Czech, it was only last week that I was party to the incorporation of CaSFFA, or the Czech and Slovak Film Festival of Australasia. Just call me Paní prezidentka! Let's see if we can't just pull off a memorable inaugural festival in mid-2013. Much more news about this will emerge in due course.

Before getting to the nitty-gritty, I feel I should mention another couple of avenues through which you might legitimately encounter films screening at this year's MIFF outside of this year's festival, perhaps then sparing yourself from needlessly making haste to see them at MIFF rather than catching something altogether scarcer, something which you really might not have the opportunity to ever catch on a big screen, or even on 35mm, ever again, or from the worry that to have missed them at this year's festival might be to have missed them altogether.

Firstly, any number of this year's MIFF titles will doubtless re-emerge at other film festivals staged hereabouts in the year ahead, whether, for example, at the Melbourne Queer Film Festival, which often re-runs a handful or so of queer themed MIFF titles in the March of the following year, or at any of the multitude of festivals celebrating (typically only the recent) cinema output of a given nation.

To cite just one example, it has been announced that the Taviani brothers' highly regarded Caesar Must Die will screen at the forthcoming Italian Film Festival, running from 19 September through to 9 October in Melbourne, and at different times in other capital cities.

Credentialled industry bods could also look to the Festival Scope platform to access 10 out of 12 of the features in the TeleScope program and as many of the Accelerator offerings as well, presuming they're willing to pony up/have already ponied up for an initial subscription charge to stream them (and much, much more) on demand.

Now, there hasn't been a terrific flurry of new release date announcements made or press releases issued by distributors and exhibitors over the few weeks since my previous post. There have nonetheless been a few of significance, with the most notable regarding Tony Krawitz's adaptation of my favourite Christos Tsiolkas novel, Dead Europe, which wasn't even in the MIFF program when I previously posted. That, and my need to remedy an error I made last time, have led me to update the table, below.

Re that error, my apologies go out to Hi Gloss Entertainment. I had had DVD releases for the three titles of theirs listed below down for October but my original source was evidently not really in the know; no DVD release date has, in fact, been scheduled yet for any of Italy: Love It or Leave It, Journal de France or The Minister. Two of these three titles (with one of them being The Minister) are presently, furthermore, under discussion for theatrical release.

All the usual caveats then about the following table, and more, apply. None of the following can be taken as gospel, not least for the fact that human error, my own most certainly included, can be a factor in information provided below not ultimately standing the test of time. Let the browser beware!


* You might like to note that Warriors of the Rainbow – Seediq Bale is being theatrically released as one film, not two.
Posted by Cerise Howard at 12:08