Master of My Domain

After a little lie down that would do Sleeping Beauty proud, my hand has been forced into posting something here anew.

Some sort of catastrophic server trouble recently left stricken the good ship Senses of Cinema and had, in the process, left me incommunicado via email for two long weeks and unable to access any of my email from a further three or so weeks prior.

It wasn't until only just a little earlier today that Senses got up and running once again after a full fortnight's lay-off. Mind you, the spell on the sidelines has done it some appreciable good; in resurrecting the site, aspects of its design have been markedly improved, even if some elements of its facelift still need quite some fine tuning (as has been acknowledged).

All this being so, you'll now be able to access two articles I've written for Senses since last I posted here: "A Twilight Portrait: A Report on the 21st Film Festival Cottbus" in Issue 61 and "Into the Past: The Cinema of Guy Maddin by William Beard; and Playing with Memories: Essays on Guy Maddin edited by David Church" - a whopping double book review - in the current issue, # 62. Additionally, I contributed to Senses' 2011 world poll, published between these two issues. 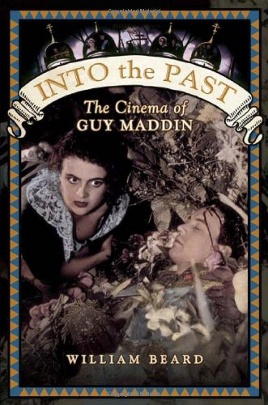 But I have digressed.

My old sensesofcinema.com address had been my principal email address for over ten years. Seeing as a) I have not, strictly speaking, been in the employ of Senses of Cinema for some time and b) I have just now been made all too aware how compromising it can be sticking for so long with an email address which is administrated by folks who are effectively a third party, I have just seen fit to mint myself a brand new, personal domain, the better to gain complete control over my email and never again fall foul of such communications strife beyond my means to remedy personally.

Hence, cerisehoward.com has been born. On the web, a visit presently does nothing more than simply and peremptorily re-direct the curious visitor right here, to A Little Lie Down.

Well, it had to do something.

Owning an eponymous domain, I now feel the pressure to use that domain for some good beyond merely using it as an expedient for reliably sending and receiving email, so www.cerisehoward.com will likely, if not necessarily immediately, yet be stocked with content pertaining to my various activities across film, music, writing and so on. There are many projects afoot in these various fields and many worthy projects in them to have come and gone before, so it might indeed be nice to have them all documented, contained even, in a central repository.

Let's wait and see what develops there...

Meanwhile, if you're someone who's been trying to reach me via email these last few weeks and been foiled, please update your records so that you have my email address down as cerise [at] cerisehoward.com. Thanks!

Now, seeing as we've finally found ourselves enjoying another Little Lie Down, I think something of an update with respect to my activities in film is in order.

Aside from those aforementioned articles in recent issues of Senses of Cinema, here are some other things to have been going on:

I'm not long back from serving on a FIPRESCI jury at the 26th Fribourg International Film Festival. It was a great pleasure to serve alongside my esteemed, and altogether charming, colleagues, namely Sheila Johnston (president of the jury); Hauvick Habechian; Nina Scheu, and Katja Čičigoj. (I'm kinda tickled that the page on the FIFF website listing our jury's members has me down as representing Preston specifically rather than Melbourne!)

My report on the FIPRESCI jury prize winner, Huh Jong-ho's cracking genre(s) film Countdown (2011), will appear soon on the FIPRESCI website alongside reportage covering several other aspects of the 26th FIFF from my fellow jurors.

Furthermore, I will yet have a full report of my experiences at this year's festival in Fribourg in the next issue of Senses of Cinema. (I've previously also covered the FIFF for Senses in 2010 and 2011.)

Some radio I've done in recent times can be accessed online.

The kind folks at 3RRR - I'll be back on the air in my usual spot on SmartArts opposite Richard Watts a week today (Thursday 26 April) - have made accessible online a spot I did back in February when I reviewed My Week with Marilyn (d. Simon Curtis, a film rather more interesting for its dramatisation - and perhaps meta-dramatisation - of a pitting of Laurence Olivier (Kenneth Branagh)'s old school hammy thesping against Marilyn Monroe (Michelle Williams)' high-maintenance Stanislavskian new school method acting, than for its more conventional biopic aspects); Steve McQueen's grim, sexually frank depiction of dysfunctional, downward spiralling siblings adrift in the big smoke, Shame (rather humorously, this film is known in the Czech Republic, after a rather unfortunate translation, as Stud! - see the poster above), and the rather misleadingly titled Leonardo Live (d. Phil Grabsky), a behind-the-scenes look at the lead-up to the Opening Night of the blockblusteriest of all blockbuster exhibitions, the National Gallery in London's "Leonardo da Vinci: Painter at the Court of Milan". If that weren't enough, RRR's internet fairies have also put online in its raw, unedited entirety an interview I conducted with legendary avant-garde artist, progenitor of industrial music and "pandrogyne", Genesis Breyer P-Orridge, who came to Melbourne to partake in a fantastic, consciousness-raising Q&A after a screening of Marie Losier's beautiful experimental documentary, The Ballad of Genesis and Lady Jaye, as well as, it transpired, to perform with Psychic TV at a memorable "secret show" at The Toff in Town the night following.

Lastly, back on December 8 - soooo last year, I know - I had a ball filling in for Josh Nelson on 3RRR's always splendid Plato's Cave film criticism podcast during a special live-to-air summer season. I saddled up my high horse to kickstart a discussion about the parochialist failings I (continue to) perceive in Australia's film festival culture, after having first mused with Thomas Caldwell and Tara Judah over the merits of Puss in Boots (d. Chris Miller); Gus van Sant's perhaps unfairly disdained Restless and the really very stabby The Yellow Sea (d. Na Hong-jin).

If you haven't yet, now's a very good time to subscribe to Plato's Cave.

On the matter of fabulous film crit podcasts, the lovely folks at Hell Is For Hyphenates - that's Paul Anthony Nelson and Lee Zachariah - have asked me to join them as a guest on their May edition. Asked to pick a filmmaker whose work we'll ultimately come to collectively dissect, after first setting any other number of film critical matters to rights, I settled on...well, perhaps I won't spoil the surprise just yet. But suffice it to say it's someone who some recent time spent in the Czech Republic only did more to further expand my already considerable appreciation of...

If you haven't yet, now's a very good time to subscribe to Hell Is For Hyphenates. (May I especially recommend you listen to the episode where Christos Tsiolkas guests and a fabulous conversation about Pier Paolo Pasolini ensues!)

Also looking ahead, I'm to introduce a 3RRR subscribers' screening on Friday 4 May of Jean-Luc Godard's Sympathy for the Devil (1968) at ACMI, a full eight days before its official ACMI season begins (you lucky 3RRR subscribers, you! Excepting, of course, any dyed-in-the-wool Rolling Stones fans, who invariably hate the film, finding it unbearably pretentious and stingy on the Stones footage...) Here's the trailer:


Lastly, I'm still working on my review of Alexandra Heller-Nicholas' alarmingly filmographically and theoretically comprehensive Rape-Revenge Films: A Critical Study for Bright Lights Film Journal. The number of films of that ilk I've watched, in a few frenzies of catch-up viewing staged necessarily a few weeks apart - well, it takes a toll, I tells ya!

I would like to finish this post by stating in pithy but no uncertain terms that if you live in Melbourne and don't get to the William Kentridge exhibition at ACMI before it closes in late May, then you'd have to have rocks in your head. That is all.
Posted by Cerise Howard at 22:24