Gosh, the tumbleweeds have been blowing round these parts awhile once more, haven't they? 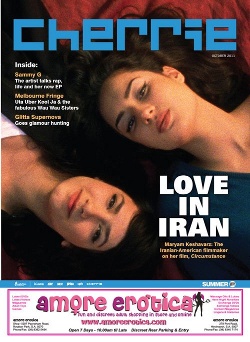 Still, it's not that I've been idle. Far from it. It's just that my energies have principally been diverted in recent weeks towards that other sort of cinema: the theatre.

(This isn't the full truth: I did slave over a hot keyboard, battling a recalcitrant DVD screener, a very tight deadline and divers alarums aplenty in order to file an interview with Maryam Keshavarz, Iranian-American director of highly provocative Iranian lesbianeering flick, Circumstance, as the cover story of the latest issue of Cherrie to hit the streets (the magazine "for the not so straight girl").)

So, yes, the theatre. I am but one of three to constitute Dirty Nicola and the Spud Hussies (or, to give us our full due: Dirty Nicola and the Cheap, Filthy, Pre-Loved, Shop-Soiled Spud Hussies: myself on bass, Katrina Wilson on keys, Nicola Bell on drums and all of us on foley), finest purveyors of 'The New Sound' as applied to the live scoring of deranged expanded marionette theatre adaptations of macabre 19th century Wilhelm Busch morality tales told in verse. Such as Max and Moritz: A Juvenile History in 7 Tricks! Presently playing at the Czech Club in North Melbourne during the Melbourne Fringe Festival. And for three more nights only!

We've several shows behind us now and, happily, I can report that they've been going down a treat, both with Joe and Joanna Public as well as with some folk "who matter". The show is considerably evolved from its ramshackle but vivacious (and even then well-received) début late last year at the Village Festival in North Fitzroy's Edinburgh Gardens, which I blogged a little about way back when, going then into a little detail about some of the Czech marionette theatre traditions the show is indebted to.

But that was then.

Here's what you need to know about the now:

Max and Moritz: A Juvenile History in 7 Tricks
at the Melbourne Fringe Festival:


Come one, come all! It's a show I'm very proud to be involved with, with the Spud Hussies a unit I'm even more thrilled to be in thick with, which - happy day! - will live on long beyond this show. And about future Spud Hussies excursions into 'The New Sound', post-Fringe and with, or without, puppets and thespians... I'll keep you posted.


*
Lest anyone be concerned that I've given myself over wholesale to pandering to the Euterpean Muse and will therefore be wont here on in to neglect the cinema (oh, had it only a Muse to call its own!), fear not! I'll be on the air on 102.7FM, 3RRR, once more this very Thursday at 11.30am in my customary slot opposite Richard Watts during his arts behemoth, SmartArts. Hurrah!

(My apologies for missing it a fortnight prior; on that occasion, I really was altogether too snowed under to surface for "A Fistful of Celluloid" and do it justice.)


*
Lastly, for now, Senses of Cinema, that august film journal of record still very dear to my heart, needs your help. Without it, it might not be much longer for this world, which is just too appalling a prospect to countenance. And yet countenance it we must.

Senses is reaching out to the cloud via a Pozible campaign in the hope that $15,000 - just enough to keep it afloat for another year while, hopefully, some other revenue-generating manoeuvres are successfully implemented - can be raised by 5 November. That's only 33 days away! And Senses still needs $7,745 - criminy! But... perhaps you can help?