(including an updated list of festival films with distribution, below)

We are now but a week out from the commencement of the 60th MIFF and I expect we've all found a bit of time since my post a week ago to trawl through the pages of the MIFF program, whether in print or in the ether, to arrive at a some parts-informed, some parts-quixotic plan to engage with this elephantine festival as best and most comprehensively we can.

Since writing my last week's post, in which I tipped as many as 15 hot picks for the 2011 MIFF, I've delved further into the program and, naturally, come across numerous other offerings that deserve attention cast upon them.


Straight off, I am guilty of one serious oversight in my initial selection of 15, and that is my neglecting the coming to Melbourne of the great Austrian materialist filmmaker, Peter Tscherkassky, to present not just two packages of his extraordinary short films but also a masterclass.

(By 'materialist' I in no way mean to suggest that Tscherkassky is preoccupied in life with the accumulation of material wealth – he's far too firmly ensconced at the polar wrong end of the film production spectrum to be accusable of that – but rather that his is a practice in which the very material of film is critical, both to his films' means of production and to their very content. With respect to the latter, it's not just the found filmed image that lights up the screen in his works, with all its echoes of past big screen glories (or ignominies), but also everything else that is of the film itself: optical soundtracks, sprocket holes, and no small amount of flicker, all subject to hyper-quick montage and rapid-fire distortions and superimpositions, wreaking often terrible and cacophonous violence upon anything and everything ensnared within the frame.)

Outer Space (1999), which utilises select footage from Sidney J. Furie's little loved early '80s horror film The Entity starring Barbara Hershey, is the brilliant and exhilaratingly harrowing film of his I'm most familiar with, and while you can find it on YouTube, you'd have to be completely daft not to avail yourself of an opportunity to see to experience it, and many other of Tscherkassky's screen cultural history-pillaging works in a cinema during MIFF. For it is only in a darkened cinema, with his films projected onto a big screen and their soundtracks run through a cinema's sound system, that his work will be done justice to and their full impact felt.

Sure, it's a banal truism that all films are better seen in a cinema, but there are filmmakers for whose works this holds true more profoundly than for others. Tscherkassky – as with any materialist – is absolutely, essentially one such filmmaker. (Why, he even hand-prints his films!) Along McLuhanesque lines, in Tscherkassky's films the medium is indeed the message... and the message the messenger...

I'm sure, furthermore, that he'll make for a fascinating guest. Rare it is indeed around these parts to be granted an opportunity to partake of an audience with a film artist, who, notwithstanding that his is a cultural produce altogether reliant upon a regurgitation of (sometimes recognisable) found footage, is irrefutably the auteur of his films, so much incontestably more so than those who perforce must marshal and rely upon the cooperation of even the smallest of crews for their most personal, and indie-est, of indie productions. For it is just Tscherkassky, and Tscherkassky alone, of an order of solitary obsessiveness equal to that also necessarily found in lone stop-motion animators, who manipulates – and prints – every single frame – temporally and compositionally speaking – of his extraordinary short films.

Other offerings to have escaped my attention last week

Buried deep within the shorts programs is Scenes from the Suburbs, a half hour-long short from Spike Jonze in collaboration with members of Arcade Fire. There's a whole lotta love out there for both Jonze and the revered Canadian indie band, but their admirers have got their work cut out for them even learning this film's in the program, what with so little focus routinely shone upon MIFF's short form offerings. Here at least is drawing a little attention to it now.

(Also buried in the various shorts programs, and granted but one opportunity each to light up the big screen during MIFF, are new works from Luc Moullet; Bens Russell and Rivers; Ken Jacobs, and Joan C. Gratz, whose stunning 1992 short Mona Lisa Descending a Staircase is one of my favourite animated films of all time.)

There are two new films from MIFF favourite Hong Sang-soo: The Day He Arrives and Oki's Movie. I'm yet to hop on the Hong bandwagon, never mind the plenty of opportunities previously granted. So perhaps now's about time. 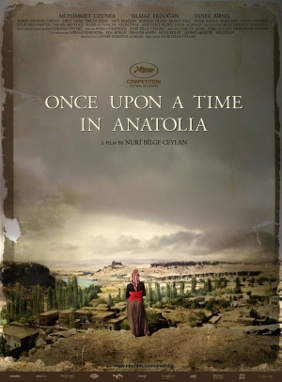 Once Upon a Time in Anatolia. Madman are attached to this one, but it'd be an awful shame if it were to go to straight to DVD and a chance to see it on the big screen were to go begging. I've seen two of director Nuri Bilge Ceylan's recent films before – Climates and Three Monkeys – and wish I'd seen still more. Expect beautiful CinemaScope cinematography and, by most police procedurals' standards, a likely very languid pace indeed...

There's a new film from latter-day MIFF stalwart Jia Zhangke, I Wish I Knew. I wish I knew what so many other people see in so much of Jia's work, but this documentary about Shanghai sounds very interesting. Taiwanese auteur Hou Hsiao-hsien – another celebrated contemporary filmmaker I've never quite latched onto, aside from his splendid 1989 film A City of Sadness – is one of the many and various folks in this doco whose thoughts on the Shanghai of yesteryears are sought.

There's also a new film from that brilliantly nasty piece of work, Bruno Dumont: Outside Satan. I expect it will be stark and languid but punctuated by sudden bursts of ghastliness which may have some sort of significance of a religious bent. Or may not.

Belgian kitchen sinkers par excellence, the Dardenne brothers, have a new film. It is prosaically entitled The Kid with a Bike. My gut feeling: the kid may not wind up having a bike for the whole film. And/or the bike is but a MacGuffin. Either way, my prediction is for one unhappy kid. And for a depressed, but ultimately impressed viewer. Them Dardennes, they deliver.

Takeshi Kitano is back! With Outrage! Folks are saying it's a great return to form. Hooray! (if they're right.)

Cave of Forgotten Dreams, Werner Herzog's new-ish 3D cave art doco is a must-see! (obvs.) But now, or in release?

To my shame, I am yet to see a film by the fearsomely celebrated French auteur, provocateur and Deleuzian sensorialist (sic?) of renown, Philippe Grandrieux. This year's offering, It May be that Beauty has Strengthened our Resolve - Masao Adachi, looks like a suitably prepossessing initiation into the cult of Grandrieux.

Of course, there's more, including a double return to the fold from the as ever capable-of-anything Takashi Miike, whose unfathomably prolific and protean work I hope I'll fall back in love with, and there's a whole slew of older canon fodder in the MIFF 60th Retrospective section, including the excruciatingly uncomfortable viewing experience that is Martin Scorsese's The King of Comedy.

It always astonishes me that every time this 1982 film re-emerges, it is said still to be little known and underseen. Really? Even now? Nevertheless, it is inarguably a great film and one which further debunks the myth that the English have a monopoly on the comedy of discomfort so exemplified by the works of Ricky Gervais and Stephen Merchant – and nor did the English necessarily even arrive at it first. That said, perhaps it is only now that The King of Comedy's time has come and it'll find that audience long trumpeted as ignorant of its charms.

Some word on a few titles I've already seen

I have less enthusiasm for Elite Squad: The Enemy Within, which closed that same festival and about which I said in that same report “I didn’t much care for [its] guns a-blazing, gung-ho actioneering, no matter how commendable its explicit attack on entrenched corruption in Brazil. (Also, I don’t think it’s ever a good idea to run with a voiceover throughout an entire film.)” And I'm right; it's not.

I have also seen, more recently, The Eye of the Storm, upon which a critical embargo has just been placed (dagnabbit!) and Norwegian Wood. Notwithstanding an impressive pan-cultural array of talent associated with it (the director is Tran Anh Hung; the cinematographer is Mark Lee "In the Mood for Love" Ping Bin, and it features a (dreadful, overstated) score from Radiohead's Jonny Greenwood), Norwegian Wood has completely put me off ever reading Haruki Murakami, whose book it adapts. What a ridiculous story, played so flatly, and with the great, tragic 'problem' at the core of the story being one so preposterously simple to remedy.

It's ordered alphabetically this time. Bold type indicates where dates have been announced in the week since my previous post; all four films thus emboldened will enjoy at least a short stint at Carlton's Cinema Nova.