Parallel lines – of further adventures in film and the other arts

Some things to have consumed me, my time and my all-too-finite energies in recent months, keeping me distracted from blogging, include:


1) A grand, month-long European jaunt undertaken back in March. It included a day spent, in tribute to Martin McDonagh's wonderful film of a few years back, lying low of an afternoon in Bruges which, as it transpired, is surely amongst the very worst places in the world one could attempt such a thing – canal-loads of tourists, even in the low season, inundate this most picturesque mediaeval theme park of a town, their cameras clicking ceaselessly all awhile. I dread to think how many times I appear in complete strangers' holiday snaps from those few hours spent in Bruges!

My trip also took in the 25th Fribourg International Film Festival. Senses of Cinema published my report on the FIFF some weeks back; the wider issue it is filed away in (#59) has just last week gone live, so please do be checking it out. And, Melburnians, you never know – some of what I've covered in my festival report (and other writers in that same issue in theirs) just might word you up on some films destined for this year's MIFF, as was the case in several instances last year.

(Re MIFF: a little more below.)

2) Speaking of Senses of Cinema, and of the launch of its latest issue, here's word of a great weight of film cultural labour I've performed even while this blog lay completely idle.

For I have not long completed the colossal task of migrating into its new-ish Content Management System all of Senses of Cinema's archival articles, essays, dissertations, rants, thinkpieces, polemics, peer-reviewed jargonfests, buff fluff, scholarly considerations, minutiae trawling 'reconsiderations', book reviews, festival reports, interviews, annotations for the Melbourne Cinémathèque, DVD reviews, ruminations upon the rise/fall/rise/fall/rise? of Australian cinema, and so on, ever published.

It took quite some doing. But I'm better now.

3) A fair period has just passed of living between fixed abodes, which made it difficult to get into any sort of relaxed groove, the better to diligently attend to the rigours of blogging. (I am in fact not completely out of the proverbial woods yet but matters have significantly improved.)

4) There has most welcomely emerged a wonderful reinvigoration of my love of music with respect to both its appreciation and its creation, in and out of conjunction with the staging of an almost imminent theatrical extravaganza. (For more about which, see below.)

5) Then there's the matter of my own disposition towards inertia when uninspired. Not for nothing have I declared myself here a “procrastinateuse extraordinaire”. I am never more so than when snowed under with workaday worries and considerations which, not being the stuff of riveting blogging, shall not further be dwelt upon here.

Here endeth the apologia. And beginneth anew A Little Lie Down!


*
This Thursday (today!), I'll be back on 3RRR's SmartArts after four weeks in the (proverbial) wilderness. I'll be reviewing Michael Winterbottom's The Trip and Terrence Malick's The Tree of Life.

Now, notwithstanding sometime sudden onsets of mild performance anxiety, I always look forward to letting loose a little film crit across the airwaves, especially when, as with today's show, I've been able to discern some sort of serendipitous link between films I'll be covering, the better to more firmly cohere my segment's contents and to bestow upon “A Fistful of Celluloid” a greater fluidity. (Well, one can always hope.)

My today's consideration of The Trip and The Tree of Life will then riff on that old warhorse, “the personal is the universal”, a philosophy – and a mantra evangelised by many a writer and teacher of writing – I feel to be at the core of both films, if manifest in completely different fashions. 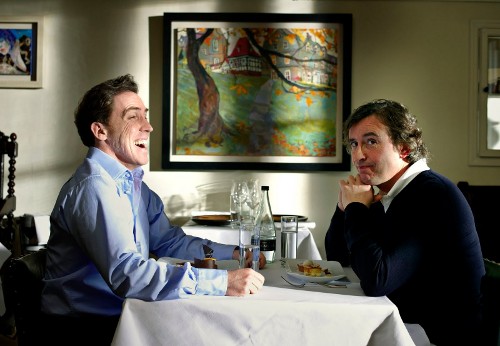 In The Trip, it's manifest through the very particularity of its casting. Steve Coogan and Rob Brydon play versions of themselves, with select aspects of their personal lives (and Coogan's in particular) fictionalised to some humourously unknowable, but telling extent, as with these same actors' casting in the same director's recent Tristram Shandy: A Cock and Bull Story.* "Coogan" and "Brydon"'s respective lots in life, ** and the one-upmanship-driven dynamic between them are milked not only for much of The Trip's abundant comedy but also for the considerable pathos the film surprisingly generates.


* Note to self: be sure to take on the mandatory-for-all-critics-at-some-point challenge of a consideration of that great shibboleth, the “unfilmable novel”, in a future post.

** By "Coogan" and "Brydon" I am referring to the gestalt entities derived from conflating the real, off-screen Steve Coogan and Rob Brydon with their fictionalised counterparts in The Trip, and in Tristram Shandy before it.

That pathos is a function of the protagonists' differing levels of success achieved relative to the levels aspired to; of the differing weights of importance they ascribe to one-upping one another, and, most profoundly come the dénouement, of their differing approaches to and appreciations of family and interpersonal relationships. In offering Coogan and Brydon as dialectical opponents, The Trip tells us much about these two gestalt entities 'individually' and specifically, but, in opposing one man (“Coogan”)'s lonely, insecure, insatiable quest for fame and fortune against another (“Brydon”)'s simpler, non-aspirational, domestically-centred contentment with his more modest lot in life, it also speaks to something universal. And that something is that great chimera, happiness, and that to which people will resort in its pursuit.

The Tree of Life parlays an absolutely extraordinary gambit in its equating of the personal with the universal. Why, the film has barely started before it unfurls an astonishing, extended representation of the coming into being of life, the universe and, oh, just everything. It's Terrence Malick's way of putting into perspective a very personal tragedy, an incident infinitesimally tiny and insignificant in the greater scheme of things, but universal in its impact. For who wouldn't, even many years into a life of comfort and of accomplishment in, say, the corporate world (or anything at all, really), having evidently risen far above humble beginnings (for example), still pause nonetheless, time to time, a la The Tree of Life's Jack (Sean Penn), to seek answers of the cosmos, of a universe which may or may not be part of some grand design (the film wisely hedges its bets on this matter), for, say, the incomprehensibly cruel loss of a beloved sibling, way back when. 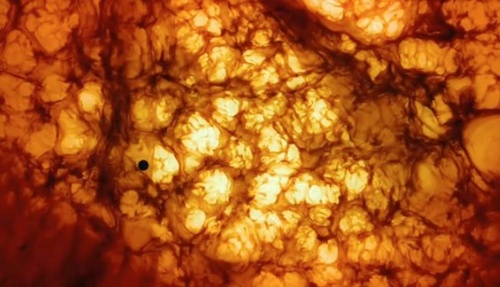 The Tree of Life goes to great and spectacular lengths to position the personal and the universal as one and the same, even aestheticising equally Jack's flashbacks into his childhood and his consciousness' into the dawn of time. The latter is to 2011 as 2001 no doubt was to 1968; the former is tantamount to the most stunningly beautiful home movie ever made. I can't wait to see it again on the big screen, and it's very rare I feel that way about something I've only just seen for the very first time. The Tree of Life is glorious cinema writ not merely large but universal!


*
The discernment and appreciation of chance parallels, motifs and themes running across multiple films is far more than something I'm occasionally drawn to ahead of doing a spot of radio; it's also (and much, much more so) a hallmark of film festival-going. It's something which considerably and unpredictably enriches the greater festival-going experience (even if sometimes also serving to render indistinct narratives, aesthetics, polemics, etc., to have graced any given individual film amongst a mass of others with which it might be found to have commonalities, blurring them all together in the memory).

Which thought brings me to the Melbourne International Film Festival, now looming large on the Melbourne calendar – its 60th anniversary edition begins in just a shade over three weeks' time!

There could scarcely be a better time, then, to re-boot this blog than when Melbourne's film culture is about to experience its peak two-and-a-half weeks for the year. I hereby pledge to do as I did last year and cover the festival from go through to whoa...

You might, meanwhile, like to be kind, rewind, and cast a glance over my last year's coverage as an appetiser.

I have committed to writing book reviews for various journals for publication later in the year. Book titles include, but are not limited to, Dekalog 3: On Film Festivals and Alexandra Heller-Nicholas' Rape-Revenge Films: A Critical Study.

And a collaboration is under way with a European festival with respect to some programming sourced from 'round these 'ere parts destined to be taken to 'round thems, and about which too much more right now would be premature to say beyond stating that it's all very exciting! And that I have some wonderful support from a few local bodies too.

In music and theatre: 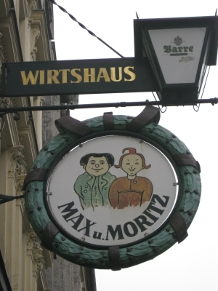 Coming to you later this year at North Melbourne's Czech Club, where it'll be running throughout the Fringe Festival, Dirty Nicola and the Cheap, Filthy, Pre-loved, Shop-soiled Spud Hussies (myself on bass; Katrina Wilson on keys; Nicola Bell on drums; the three of us altogether on foley) will provide live, original musical accompaniment to a rather more polished and wonderful vaudevillian theatrical production of Wilhelm Busch's Max and Moritz: A Juvenile History in Seven Tricks, replete with marionette and human cast members, than already went down a treat at last year's Village festival in North Fitzroy's Edinburgh Gardens. Stay tuned for more about this in coming weeks as well as for details of further Max and Moritz action to follow at other festivals later in the year!

My novel is resolutely not writing itself but we'll be setting that small matter to rights later in the year (one hopes). Meanwhile, my research for this project, already gestating overlong, carries on apace...

On which note, I'd love to hear from anyone who knows of any novels wherein a caricaturist features as the protagonist. Anyone know of any? Anyone? Any?